The traditional Christmas pound cake in my family is called “Mildred’s.” 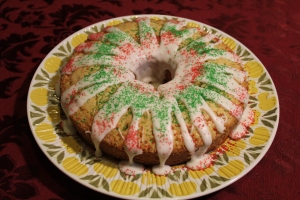 This simple, bullet-proof recipe came from Mildred Oakes, one of my grandmother’s best friends in Congers, New York.

I have a faint memory of Mrs. Oakes. I am peering through a screen door into a kitchen at a heavy woman with thick ankles and permed brown hair. I can tell the woman seated in a wooden chair has never been young and has always found getting out of a chair to answer the door an effort.

I also know she has been put on earth for a purpose. And that purpose was to create The Recipe.

My mother later told me Mildred probably copied the recipe off a can of Crisco. She still deserves credit for saving something ephemeral–a Christmas recipe featured on the Crisco can in perhaps 1935. Great works of art (such as Mildred’s) are often saved from disappearance by just that small an act.

I wonder how many of you are still with me, and how many, stunned by my flagrant use of the word “Crisco” have clicked away. I realized how far Crisco has fallen when I bought a can at the grocery store this morning. Crisco is given shelf space the width of two small cans—how small the cans have become, and how apologetic the manufacturer is, now offering “butter flavored” Crisco.  Butter-flavored? If butter flavor were what I wanted I’d buy butter.

No. Crisco, that all vegetable shortening (which, by the way has 0 grams of trans fats and 50% less  saturated fat than butter) is the magic ingredient.

As I write this five eggs sit on the kitchen counter. When the eggs reach equilibrium with the temperature in the rest of the house I will cream the Crisco and sugar then add the eggs one at a time. Sifted flour will be folded in but barely stirred.

Mildred’s requires the alchemy of doing very little before spooning the batter into a greased and floured bundt pan.

When the cake comes out of the oven one hour later out it will be heavy as a brick and just as dense, a pound cake worthy of the name. Ship it anywhere by the slowest possible form of transportation and it will arrive the better for wear.

For longevity I’d pit my Mildred’s against your fruitcake any day. And people will want to eat this cake, not re-gift it.

Note: I wrote the earlier portion of this post with the smug certainty this recipe I’ve made dozens of times would come out as it has year after year–perfect. I’ve now baked four in a row and each has failed in some conspicuous way: didn’t rise, wouldn’t come out of the pan, the crisp top layer cracked and fell off.

I wish I could consult Mildred, or my grandmother, or my mother, all of whom are now dead–the tradition is faltering under my watch.

Here’s the recipe, copied exactly from the index card on which my mother wrote it when I got married.  Please try it. Tell me it still works.

Cream shortening and sugar for eight to ten minutes to make it fluffy.

Add one egg at a time, then lemon juice.

Sift flour and salt and fold into mixture.

Bake at 325 in a greased and floured bundt pan for one hour.

Drizzle thick icing (powdered sugar with lemon juice, or milk and a flavoring like vanilla).

You are currently reading Mildred’s at Adrian Fogelin.