When I met my husband, Ray Faass, he was the photographer at The Baltimore Zoo, the man who hired me to be the zoo’s illustrator.  Who knew it was such a permanent hire?

Most of the images I post on this page will be his. Each with some small story attached, but almost always the reason I am sharing the photo is the quality of the image itself.

Each is a moment–some from long ago–what Ray calls “a preview of past attractions.”

Click on an image to enlarge it–it’s worth the extra two seconds! 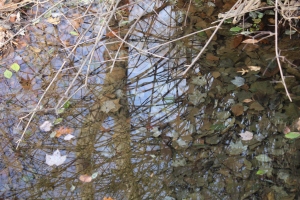 For the first time in years, Ray and I (and Rudy the pooch) traveled north for Thanksgiving.

We followed Fall up the coast as it went from a handful of yellow leaves to bare branches.

We were in New Jersey to celebrate the holiday and to meet our new grandson, Spencer, but our tour of the season, which wound backwards as we drove home, was almost worth the trip by itself.

This is Fall, reflected in the creek that winds down one edge of Josie’s property.

Robins pour through Tallahassee on their migrations north and south.

They are vocal, social birds, and when the robins are in town the air is full of their chatter–and sometimes our birdbath is full of robins.

I love observing life on a smaller scale, the insect that doesn’t know and doesn’t care that I am observing it, or even that I exist.

I wonder what is watching us, finding our small lives of interest.

The summer garden I consider my own belongs, in reality, to many others.

Some, like the lizards and spiders are there to eat the insects attracted by this oasis of lush greenery.

Others are there to eat the garden itself–and since we use no pesticides they usually get away with it.

This particular garden spider has strung its web over my Early Doll tomatoes.

Climbing as high as it can it garlands bare branches, taking in the sun.

Before winter is quite ready to let go, the Jessamine promises spring to anyone who takes the time to look up.

This is the tideline on St. George Island one early morning in November, but it could be almost anywhere on the Atlantic coast.

Those who walk the beach always look down, scavenging what has been cast out by the sea, and  leaving the evidence of their own passage in the sand–until the next rising tide washes their foot prints away.

I can’t imagine taking this walk without ending up with a sandy pocketful of shells. 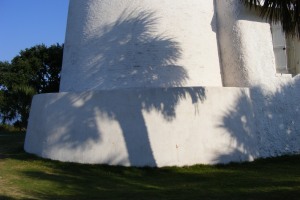 The St. Marks lighthouse is an old friend.  For several years Ray and I followed its beacon through the dark to meet up with other pre-dawn butterfly enthusiasts to tag monarchs on their annual migration.

St. Marks is one of the places from which the butterflies depart, setting out across the water as if they know exactly where they are going.  And perhaps they do.  Although we have not made the trip to the lighthouse for a while the tagging project continues, because we humans are not as certain as the butterflies.

For many summers my family gathered in Wilton, Maine.  Not really a tourist destination, Wilton was the home of Bass Shoes before the company closed its factory.

The Maine Summer is short, the flowers quick to bloom.  The gladiolas in this picture and the sunflowers in the next are blooming on the hill beside the road to the you-pick blueberry farm.  I especially like the gladiolas.

“Glads” as they are called in my family, are the flowers my taciturn Swedish grandfather grew in huge numbers.  It was perhaps the only time he ever got carried away, ordering bulbs from fancy catalogs.

He planted about an acre of them, then the wettest winter in memory rotted them all in the ground.  Chastened, he went back to more practical plants.

This photo was shot at Bluebird, the ten acres we co-own with gopher tortoises, harvester ants, wild turkeys and an array of spiders. Shot deep in the Fall, the Sassafras leaves have flamed red.  The next rain or stiff wind will strip the branches bare.

Also shot at Bluebird, this web was luffing in a light breeze early one grey morning.

Strung between the branches of the peach tree, it was spangled with dew.

It was an August morning, misty and still cool. Ray and I walked the road that runs beside Chesterwood, the studio of Daniel Chester French, the sculptor who created the statue for the Lincoln Memorial.

Follow the road and you will see the two-story barn doors that allowed the finished statue of Lincoln to be taken out of French’s studio.

I arrived at the writer’s retreat on St. George Island freshly treated for a skin cancer on my face.

What a place to be with after-care instructions that said, in capital letters, NO SUN for three days.

Keeping vampire hours, with only a little cheating (and my back to the sun) I walked the beach, casting a large shadow while up at the retreat house writers stared intently at their computer screens–their own personal suns.

I will sing anywhere, anytime–especially if I get to harmonize.

On this summer evening I’m harmonizing with Craig, who stands to my left.

Craig is my singing partner in “Hot Tamale,” but sometimes Craig instigates a guerilla performance with friends, in this case Gordon Halleck on washtub and Chris Ash on lead guitar–and just beyond the edge of the frame, Paul Harvey on congas.

For this particular performance we converged on the gazebo at Lake Ella and did our best to look official. 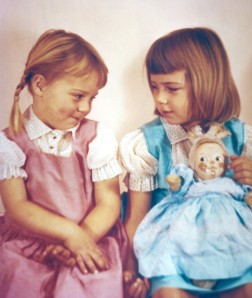 This one was shot by my Uncle Giulio–I remember that blue dress!  The pink one my sister, Claudia, is wearing too.  They come from the period when my mother sewed us matching dresses for each major liturgical celebration.  Poor Claudia got to wear both dresses.  Hers first, and then mine when I out-grew.

In my lap is Dido, my favorite doll.

One of my regular “author visit” stops each year was in Dalton, a north Georgia town today dominated by carpet mills, but less than a mile from the hotel where we always stayed the past asserted itself along a ridge line that is now part of the Pinhoti Trail.

This stone wall was built over a five month period by Confederate soldiers. Boulders were also propped along the ridge line and pushed over, cutting swaths through the Union troops that attacked on May 8, 1864 in what is known as The Battle of Dug Gap.

In the morning mist it is not hard to feel the presence of those young soldiers, crouched behind the wall, wondering if they will live out the day