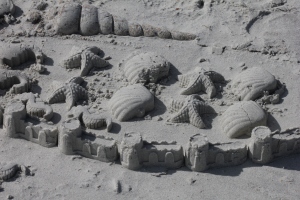 until the tide lets out its breath.

But still we build the castle.

Knowing it will whither

we pick the bouquet

and put it in a jelly jar

Our community garden was Kary’s dream.

Luckily, Kary is a practical dreamer.

She hoop-jumped until the City of Tallahassee gave us the use of a chunk of land at the elbow-bend where Roberts becomes Jackson Bluff, a curve so tight school buses take down the traffic arrows along with the occasional decorative crepe myrtle.

Before neighbors began hammering together the raised beds and planting, the plot was the weedy cut-through for people headed to the nearby convenience store for Swisher Sweets, lottery tickets and Little Debbies.

Although we put up a short fence when bike tracks crisscrossed a hill of watermelons, the right to cut-through remains unchallenged.

We hope that, as they cut between the beds, walkers enjoy the green and consider becoming part of the community of community gardeners.

END_OF_DOCUMENT_TOKEN_TO_BE_REPLACED

Time to be old.

My family, young and old.

Being old feels sudden, a surprise sprung on me by life.

But the signal, like a pheromone that alerts every ant in the colony, has reached most members of my generation.

The news comes from the bodies we occupy. Joints don’t work as smoothly as they used to. Pains flare up, with no explanation but time. The mirror reflects an unfamiliar, old, face.

When we were young we caught death’s attention with our stupidity. Convinced we were immortal, we drove too fast, swallowed things just to see what would happen, hitched rides with strangers, swam when the flags were flying.

For those of us lucky enough to be growing old, death gave us a good scare, then let us go.

END_OF_DOCUMENT_TOKEN_TO_BE_REPLACED

I know you won’t read this.

You have made yourselves as remote and inscrutable as God, and yet as a member of the earthbound 99% I am compelled to shake a fist and shout, “Unfair!” into the wind.

Born in 1951, I remember a time when the middle class held the bulk of America’s wealth. Oh you were rich even then, but you still breathed the same air, walked the same earth as the rest of us.

It was still possible for one of us to become one of you.

In those days the American Dream was so solid it could have been called the American Plan. Work hard, practice thrift, raise a family and pass your gains on. Play by the rules and the opportunity to have a decent life was within reach for almost everyone.

END_OF_DOCUMENT_TOKEN_TO_BE_REPLACED

You are currently viewing the archives for May, 2015 at Adrian Fogelin.