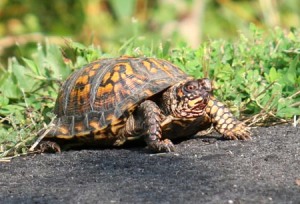 I was out for my morning walk.

Maybe the turtle, tipped awkwardly up against the telephone pole, had been doing the same.

Spun off the road, shell smashed, it was very dead.

It had done everything it could to survive its encounter with a tire. Head and legs were pulled inside its protective shell, a defense that would have worked against almost anything in the natural world.

I looked in and saw the turtle’s face, the closed eyes. Heart broken, I wanted to apologize for my whole careless species.

But my day went on. I ate breakfast and edited someone’s story, then went to practice. Craig and I played our usual four hours or so and I drove home.

It is very hard to turn the music off after practice and almost every song I write begins in that fifteen minute drive. As I rolled past Wal-Mart on Capitol Circle the turtle came back with a snippet of tune.

Dead turtle lying in the middle of the road, thought he’d get across but he moved too slow.

Passing Angel’s convenience store I thought about the guy who had hit the turtle and decided to give him the benefit of the doubt.

I bet he was preoccupied, locked in the very human state of thinking about something else while driving (heck, I was writing a song while driving).

Worried man sitting behind the wheel, little bitty thump is all he feel

Compared to his life it ain’t no big deal, lotta road kill wherever you go

Craig never saw that dead turtle, but I played him the song—by the next practice there were four verses.  He began rearranging words and adding a good guitar part—in my hands the guitar part for a new song has to be as simple as clothes pins, attaching melody to a line of lyrics.

I hate to reveal this in print, but Craig has a tendency toward calypso. He’s tried calypsotizing a song or two in the past much to my horror, but on this one it seemed to work.

While freezing and sweating he makes recordings on which he plays various instruments, layering track upon track, until at last he says, “Okay, I’m ready for your vocal.”

Last week I did the vocal on The Dead Turtle Song.

Maybe one day I will do justice to the tragedy that takes one small life after another anywhere a worried man sits behind the wheel, but songs have a strong will to become free-standing. They represent themselves, and this song chose to be happy–and not about a dead turtle at all, but about the sometimes blissful human state of not-knowing.

Here’s The Dead Turtle Song in all its garage band glory. Special thanks to our friend Paul Harvey, the phenomenal Afro-Cuban drummer who made all of Craig’s calypso dreams come true by adding the rhythm track.

Harry Belafonte, eat your heart out.

§ 4 Responses to The Dead Turtle Song.

You are currently reading The Dead Turtle Song. at Adrian Fogelin.