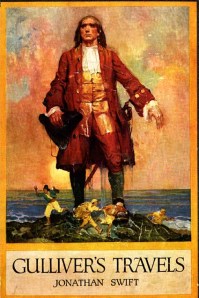 Thursday was the last day of my summer workshop for young writers.

Starting with props as varied as a pair of old shoes, an ancient Roman oil lamp, and a whale vertebra, we had already tackled the elements of fiction with three days of structured exercises.

It was time to turn the antic mind loose with some free writing.

“See that scrap of paper in front of you on the table? Write a noun on it and pass it to the person on your right.

“You have five minutes to put down any thoughts that word triggers.”

I scrawled “hamsters” on a yellow slip of paper and passed it to Grace.

That word and I had such a long history. Five minutes. I felt a flutter of panic.

And then I thought. Who cares about me? Concentrate on BOOK. And my pen flew:

It sat on the shelf, unopened since July 9th, 1943, although no one knew that but the book.

Why, the book wondered, why am I so neglected? The letters on my spine are gold. My story is rip-roaring.

Inside the book Gulliver was bored out of his gourd. He had navigated his way through his travels 943 times and now here he was, back on a way-too-familiar beach with a swarm of miniature humans, yelling orders in high-pitched voices.

He had had it with philosophizing horses and tiny humans; he longed to venture into the great unknown outside the book.

He sometimes heard sounds from that world, voices mispronouncing familiar words, strange music. Sometimes he smelled food and his mouth watered. Book food was either too big or too small depending on what page he was on—and all of it stale.

Each time he reached the cover Gulliver would give it a shove, testing the possibility of escape.

Gulliver was strapping, his shove forceful and sincere, but the book’s cover was held tightly closed by the volumes on either side.

And the book didn’t like his attempts at escape; without Gulliver the book would have a hard time maintaining any semblance of plot.

When Gulliver shouldered the front cover the book reprimanded him by rearranging letters found on the title page.

There was no Q in the title or the author’s name, but Gulliver got the idea.

If he tried to force the back cover the word END became suddenly bold. 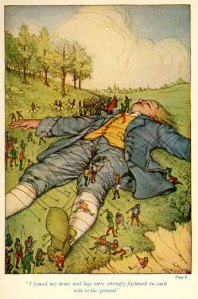 On the day of his escape, Gulliver was dozing, letting the Lilliputians tie him down again when he felt a tremor.

Sitting up, he broke the thread-like ropes. The tiny men let out mousey screams as the book was taken down from the shelf.

Seizing his chance, Gulliver jumped–and found himself in a room lit by glowing orbs, dressed in clothing that appeared to be no longer in style.

Hung on the wall was a painting that moved and talked, but it was being ignored by an adolescent who stood gawking at Gulliver and clutching a musty book titled simply, “Travels.”

Note: Okay, I worked on this a little getting it ready for this post. It’s called editing and we talked about that in the workshop too. I am just grateful I was not seated to Maya’s right. The word she passed to Dominic was POOP.

§ 2 Responses to Gulliver in five minutes.

You are currently reading Gulliver in five minutes. at Adrian Fogelin.