Where I come from. 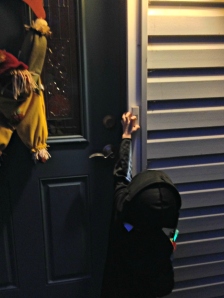 Trust me, the boy is my grandson Matthew, and trust Matthew, he is a skeleton wearing a pig hat.

According to him, he is either “a pig skeleton” or “bacon.”

The door belongs to a house that used to be mine: 5 Canoe Brook Drive, Princeton Junction New Jersey—a fact I must take on faith. I can’t see even a glimmer of the house I grew up in.

What’s with the vinyl siding? That’s not our front door.

Were the year different, say some time in the sixties, I would have been the kid in costume, but I wouldn’t be ringing the bell.

I’d be running out that door, claiming to be George Harrison, a gypsy, or a cigarette girl in fishnets carrying a tray full of my grandfather’s cigarettes.

I have so many memories of that house and that nothing-special suburban development.

Bet you have similar memories. Despite our great mobility, humans remain creatures of place, anchored. For many of us that place is in the past.

For my father it was Congers, New York, a town built to lure Scandinavian immigrants out of New York City.

Into old age, he wrote about Congers. If he had any say, heaven includes a branch of the West Shore Railroad, the track running right behind the house, just like up home.

In editing other writers I see that their hearts, and even their identities are wrapped up in place–Southern writers in particular. Being Southern confers bragging rights and proud peculiarities.

Everything from cathead biscuits to quirkily constructed prepositional phrases are treasured as I learn every time I correct them (correct being my take on the situation).  “Oh, you wouldn’t get it,” they allow magnanimously. “It’s a Southern thing.” 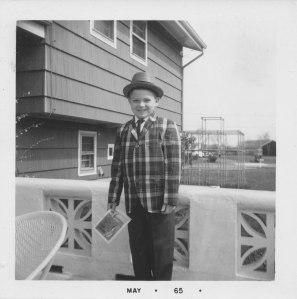 But most of us are proud of where we come from, we’re enlarged by it–we’re not a solo act. We’re part of something much bigger.

We are proprietary, even exclusionary about the attributes of home.

Come from Buffalo and you’re proud of how the place’ll freeze your butt off.

New Yorkers take personal pride in all their city has to offer, as if the Guggenheim were something they thought up themselves. 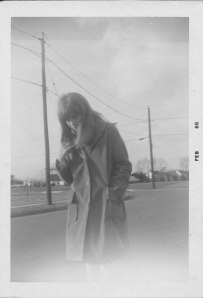 As we remember a place, I wonder, does it remember us?

That house clad in new siding, does it hold onto the fourth grade girl who closed the door on her first room-of-her-own, and discovered the luxury of solitude?

Is there an echo of the sixteen-year-old who sat on the roof with her guitar, imagining she was Judy Collins?

Does my family’s past ghost around that 1960s split level?

It’s not grand, this place I come from, but the smell of its summer-mowed lawns and the shouts of its kids running the streets on August nights, the slap of its screen doors linger in my writing and in my sense of who I am.

It’s where I come from.

You are currently reading Where I come from. at Slow Dance Journal Blog.