There were twelve of us, all women, who had signed up to share a house and a week; writers on retreat. 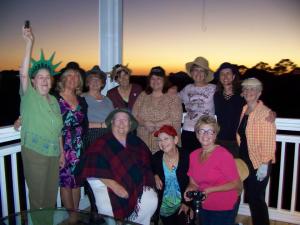 I don’t know how men would prepare for seven days of cloistered togetherness.

We began with a buzz of emails introducing ourselves, our hopes, our fears, our wine and stiffer-drink preferences for evenings after we’d finished writing.

As it turned out we never finished writing.

Luckily we could multi-task.

Someone suggested that hats would be nice for our group shot.  In our minds we were already a group.

During our first dinner, one of us took a steely look around the table, asserted that we were all women here, then took her uncomfortable bra off, Houdini style–if you’ve never seen this slick move, it all happens inside the gunnysack of a woman’s shirt.

I get the feeling that men, forming a new group, are competitive. Women can be, but more often we bond by showing each other our vulnerabilities.

I found myself talking about my mother, and how her death was so painful to me that I had walled it away, only to discover that all the good about her had been walled away too.

Then, because of the sympathetic audience, I found myself writing about her again and again, getting back at least a glimmer of her. 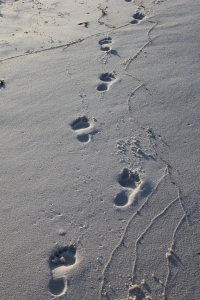 In a process one of my neighbors calls “touching antennas” we began to learn about, and from, each other.

Linda, a native of the UP, was fascinated by the heady southern accents of many of the others. She took informal lessons in “talking southern.”

Her main take away was that a word, in southern, contains far more syllables. At one dinner the challenge was that each person say “shit” as southern as possible. No good old boy ever put more syllables in that humble word than Linda. “Shee—i—i—i—i—t.”

Talking Southern was comic relief—and we relieved ourselves comically any time we were not writing. We laughed until we hurt, but we wrote more.

Although we sat elbow-to-elbow around the table, we were making separate journeys. As she peered at her computer, Linda was returning to the UP, to a fictional boarding house where the family is smuggling hooch across Lake Michigan during prohibition. Gina re-imagined the civil-rights south of the sixties, Mary Lois the incubating days of the American Revolution. Susan built a dystopian future, Peggy a world in which Prometheus might put on a pot of coffee for you in the morning.

And so we wandered, giving each other the freedom to be present, yet absent.

When absent, each of us was going some place far beyond the confines of a house on St. George Island. And when we returned, frustrated or elated, we returned to each other.

We shared meals and read each other’s pages.  We wondered how hard it would be to get paper at the time of the Continental Congress–something Mary Lois needed to know for her story. We did writing exercises that revealed our personal histories.

We have never officially declared Fiction Among Friends, now seven years old, a women’s retreat. But this year our first man dropped in on us. He was a great guy, and a dedicated writer, but his maleness made us aware of our bra-lessness. It rippled the calm, open state in which we were living and working.  It robbed us of our essential privacy.

In our real lives, as women, all of us answer to a lot of people, fitting in writing when we can. If there is one thing we women who write know, it is that writing is selfish. It is a Houdini act of the highest order that involves absenting ourselves from time and place, vanishing while still in plain sight. Sadly, those who make demands consider us present.

By unanimous vote, we agreed that Fiction Among Friends is a retreat for women only.

Maybe next year we won’t even bring our bras.

Note: Want to see a little of the nitty gritty about this retreat? Here is my post from an earlier year: The Writer’s Retreat.

§ 7 Responses to Fiction Among (Girl) Friends.

You are currently reading Fiction Among (Girl) Friends. at Adrian Fogelin.