We arrive at the Tallahassee Regional Airport nervous.

Packed in our carry-on bag is a tile grinder and a microscope.

What devices of mass destruction might they resemble when viewed on the ghostly black-and-white TSA screen?

We take off shoes, empty pockets. We enter the new futuristic scanning tube one at a time and stand, arms raised. It takes a good twenty minutes to move fifty feet, but our carry-on luggage makes it through; we must be entering the national transportation system at one of its soft spots–or else the screener is an out-of-work biologist who knows a microscope when he sees one.

Either way, we’re in.

END_OF_DOCUMENT_TOKEN_TO_BE_REPLACED

Another year is about to be folded into memory like a flower pressed between the pages of a book.

Except for a very painful hand surgery my husband had in September, 2011 has been a straight stretch of river that flowed smoothly, allowing us to go on about our usual business of growing vegetables, singing, building fires in our wood stove, writing stories, talking to our dog Moo, watching our grandson acquire language—and opinions.

And each week I have posted to this blog, often wondering what I would write about–until I noticed a spider or remembered some long-gone uncle and found a place to begin.

My husband, Ray, saw each of these essays first, sometimes questioning my premise, always holding me accountable for making sense. When a post passed that test I’d take a deep breath and click “Publish.”

And then it was your turn.

END_OF_DOCUMENT_TOKEN_TO_BE_REPLACED

My father’s head was too big for any conventional hat, one with the size printed inside on the sweat band. Even as a small and skinny boy his head was so big people said he looked like a lollipop.

His was a square Swedish head, flat on top, flat in the back. Viewed in a harsh light it had corners.

Within the reach of my memory, except when I was very small, that head was always shiny and bald.

A head like that required a hat that conformed to it, not the other way around, and so he always wore a knit beanie.

His mother, Florence, made his beanies in his early years. Once she lost the pattern only to find it filed in her recipe box behind the tab labeled “Beans.”

END_OF_DOCUMENT_TOKEN_TO_BE_REPLACED

The world according to who?

He caught my eye as I drove past him on his bicycle.

His shoes were shiny. His yellow suit was too.

The day was warm for a polyester suit and the man who wore it was sweating as he labored at the pedals. To me, the outfit and the mode of transportation suggested a preacher.  I looked for a Bible.

I tried to imagine the next scene when he leaned his bike against a tree and knocked on a door.

As a writer I spend my time imagining the world each character inhabits, the doors that open or stay closed, the thoughts in the mind of the man who has just knocked.

It is my job to aquaint the reader with the truths, the rules, the joys and heartaches particular to the world as my character knows it.

END_OF_DOCUMENT_TOKEN_TO_BE_REPLACED

The family profession: women who write. 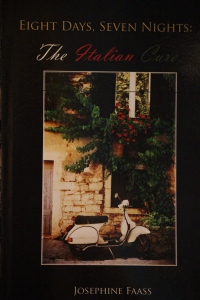 In a moment I’ll turn this post over to Josephine Faass, the author of, “Eight Days, Seven Nights, the Italian Cure,” who will tell you about her journey from resentful daughter of a novelist to a story-afflicted writer.

When talking to readers about my books I tell tales of growing up in a house littered with manuscript pages. What I don’t share is how hard it was for my mother to write those pages. It’s indicative of the balancing act that was her life that her rough drafts were always typed on the backs of old reports from my father’s job as a chemical engineer.

Writing was her guilty pleasure. She was stealing time from her “real job” as a wife and mother to spend time with people who didn’t even exist. Until my books became an income source I did the same, giving up sleep to write. No one but my characters wanted anything from me at 4:30 in the morning–and still I felt guilty–with cause as I now see from what my daughter has written.

In the only interview my mother ever gave, which was for the local paper, she said that her goal was to write with the raw courage of a Norman Mailer. I contend that Norman Mailer, in fact any man who writes, has the wind at his back. For a woman the act of writing is kept private, done on the sly in order to cause as little inconvenience as possible. I remember watching her stir dinner with one hand while editing with the other.

This is the way women write.

My childhood memories are full of writers.  And I’m not talking about Judy Bloom or Edward Gory (although they’re in there, too), I’m referring to Maria Bontempi Fogelin and Adrian Fogelin.  My grandmother and mother.

END_OF_DOCUMENT_TOKEN_TO_BE_REPLACED

You are currently viewing the archives for December, 2011 at Adrian Fogelin.