Ever notice the park on Tharpe?

It’s easy to miss the flat, buildingless lot next to Burger King.

A loop of asphalt driveway; a sparse, scruffy lawn; a few shade trees and those heavy concrete picnic tables and benches that say, seriously people, this is a park.

That’s pretty much it. 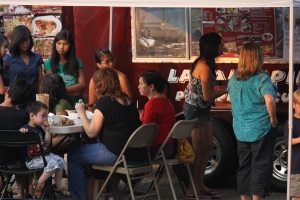 I can’t think of a single reason to go there, especially when the mercury sets its lazy butt down on the hundred degree mark and gets comfortable.

Come out to the nondescript park on Tharpe any Thursday or Friday night.  Like the circus has just rolled into town, the multicolored food trucks will be there.

You’ll hear the hot drone of  generators. Take a deep breath and smell the food!  I’m not talking grease-truck fare either. 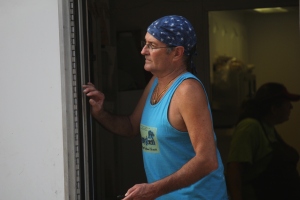 From Philippine cuisine to pulled pork, from rum-flavored cupcakes to shrimp pockets, it’s all good.

Painted on one of the trucks are the words “Street Chef.”

Yup. That about says it.

Check out the big white trailer with “Cuzzy’s Key West Seafood” emblazoned on its side first.

Not an advertiser’s invention, Cuzzy is a fifth-generation conch from Key West who came to FSU to play football, got married, and stayed. Cuzzy is a big, effusive man—move fast if you don’t want a hug—and Truck Night is his baby. 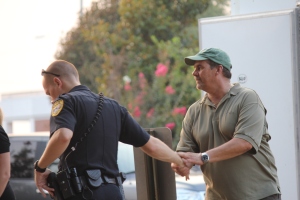 Behind the laid-back friendliness is a man with a plan. Cuzzy has talked to everyone up and down the city chain of command to keep Truck Night happening, family-friendly. and legal.

But as long as you keep that open bottle out of sight in your cooler you don’t have a thing to worry about. 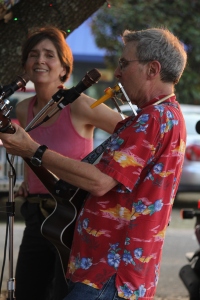 There’s always music, amps and guitars and mics set up under the trees, performers contending with the un-even ground and tree roots, not to mention the occasional lightning strike.

In the  dissipating heat of a summer evening, the sky overhead often boils with clouds which are good for a breeze or a near-death experience–it can go either way.

If it rains, Cuzzy and the other vendors pack it in, but most nights the air cools, the band plays on pitch, snow cones turn tongues blue, Cuzzy smiles out at the crowd beatifically, and no one has spent a cent for anything they can’t eat or drink.

Honey, Truck Night may just be this recession’s version of a rent party, everyone getting together for a good time, passing a few bucks from hand to hand, and going home happy.

Does any of the following describe you? 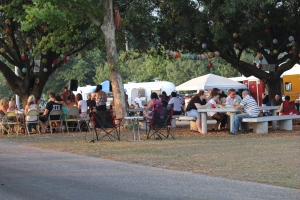 Worried about the local economy (as in the interior of  your own pocket)?

Wishing some of that wealth would trickle down like it’s supposed to instead of  defying gravity by trickling up?

If you answered any of these questions in the affirmative, there’s a remedy and its name is Truck Night. If misery loves company you’ll have plenty. But it’s hard to be miserable while eating conch fritters and watching the local talent dodge lightning strikes. 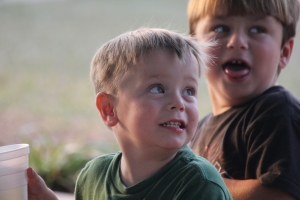 So bring your kids.

Bring your body, weary from sitting at a computer all day and shake that thang.

Dress light, throw a a couple of folding chairs in the trunk
of your car and come on out. 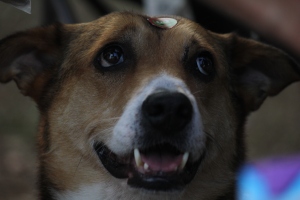 You are currently reading It’s Truck Night! at Adrian Fogelin.