I felt as if I was standing in a cloud of gnats–buzzed by emails, phone calls, the internet, and  the expectation that I could keep up with everything  happening everywhere, and respond with the appropriate sympathy, indignation, joy, or sorrow.

In the constant barrage of information/stimuli/requests for my immediate attention I strove to move ever faster, assuming a defensive posture, as if covering my head with my arms, and I kept going.  But the faster I ran, the faster time sped, until I woke one morning wondering if anything fit into a day anymore, even something as modest as forming a coherent thought.

My one coherent thought when I became finally, and completely overwhelmed was that I had to stop running.

Searching for something constant and still, I pictured  a rock in a stream, parting the water that rushes around it, slowing the flow, however briefly.  I wanted that kind of stillness.  But becoming more rock than stream is not easy.  I was raised to be polite, to respond to the requests that have become more and more insistent as humankind becomes increasingly interconnected.

But when I thought about my one finite life I realized I could not offer what time I had to this voracious world with an open hand.  I had to slow things down. 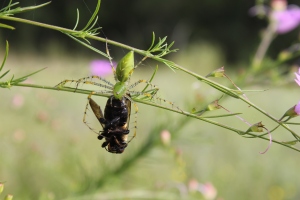 As I worked to decelerate, two bits of science appeared to support my counter-intuitive decision to deal with the need to go faster by slowing down.

First was the news that multitasking lays down no long-term memories.  Do many things at once and the hours and days disappear like change through a hole in your pocket;  what could pass more quickly than time that leaves no trace?

Second, is the explanation of the way time seems to slow during a disaster.  Your car, skidding on ice,  takes forever to hit the ditch because your brain is observing the scene at a million frames per second and analyzing each one.

When I began to treat each thing I had to do as if it were the only thing on my list and give it my full attention, I felt instantly more sane, but there was an unexpected outcome as well.

Like the slow-motion progress of the car toward the ditch, concentrating fully seemed to create a small eddy in the current of time.  When I paid complete attention things didn’t move quite as fast.  It may be an illusion, but my days feel longer.  My chest feels less tight.

In addition to treating each task as if it were the only one I had to do (now that I have all this slowed-down time on my hands) I began to look at each thing in the world around me as if it too were worthy of my full attention.  I watch the spider that is spinning its last web of the season on my front porch, and the bees that nod the Mexican petunias in front of my door.  All around me a billion lives are being lived, each interesting, each a world unto itself, and all are heedless of our human sense of time.

What if I’m wrong in trying to move slowly and with purpose?  If so, I am entitled to this choice, this mistake.  And I am just one person.  I can’t believe that if I fail to keep up it will matter in the broad scheme—but maybe like the rock in the stream I’ll create a small eddy where the river slows.

§ 5 Responses to How to slow…time…down.

You are currently reading How to slow…time…down. at Slow Dance Journal Blog.